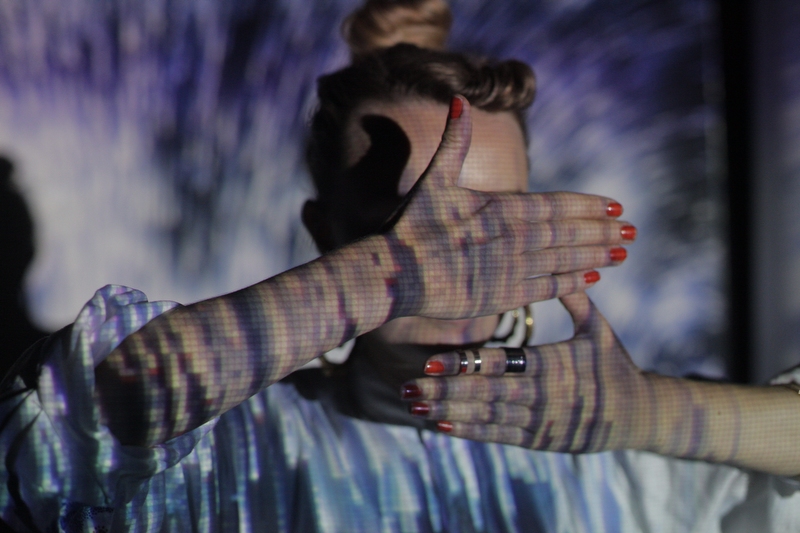 Your last album, Modern Blues, was released on April 29. To begin with, can you tell us about the genesis of the project: how did you proceed to create this album?

Modern Blues is the 3rd release in my own name and I was drawn by the idea of creating something raw mixing up all the genres and styles I like. At the same time I didn’t want to think to much. Rather do. That’s why I chose to do all the production myself. I love to work with other people but this time I didn’t want to define and explain things. I just needed an output I think.
The songs were recorded both in Copenhagen and in Paris on different setups as I was moving around quite a lot. So I would use whatever instruments were available to me. I mean, most of the vocals are recorded on a Shure SM58 mic. But I kind of like the idea that it sounds almost exactly the same on the record and live because of this. I’ve never been a fan of “pretty” and my limitations became my strength to move as far away from “pretty” as possible (smiles).
Of course the circumstances also shaped the sound that is raw and distorted at times.
– But my life had been distorted for years and I guess it felt good to connect that with the sound.

What differentiates this new album from your previous releases? Did you want to express new things with Modern Blues? Can you tell us more about these?

Well, first if al it sounds pretty different. My life changed drastically when I was 20 years old and had a big accident, and my life has been deeply influenced by that. In both bad and good.
Right before I started Modern Blues I felt a change. For the better that is. I had more energy – both physically and mentally as the pain had slowly gotten manageable. But I also had some anger and deep frustrations that I wanted to let
go of and I didn’t feel to sit down and talk about it. I guess it felt more proper to get it out in music.
It was kind of like coming home from a war but being the only survivor. On one side you’re extremely blessed to be alive and on the other you’ve seen some things that can be hard to erase. So we have to turn our frustrations into something good. That’s what I tried to do with Modern Blues. Cause I think we all at some point in our lives will be challenged and I truly believe we all have much more strength and power in us than we can ever imagine.
– It’s when you’ve been through hell you really start to appreciate heaven on earth.

How did you choose the people working with you on this project (production etc)?

Well, I just chose myself (haha) and then Blanka for the mix and mastering. Blanka is great to work with. We’ve been friends and worked together for the last 7 years and I feel he really listens to my ideas for the mix and is ready to go with them even though he might otherwise do it differently himself. He’s a hard worker and at the same time a very creative mind. Inspirational and fun.

With Blanka 👏👏👏 -one of my first friends when I came to Paris 7 years ago. Always a pleasure to work and hang with this one! #friends #solid #paris #superflyrecords

Beyond your EPs, you have done many collaborations: Dafuniks, ASM, Jukebox Champions, Mister Modo & Ugly Mac Beer… How did all these meetings happen?

A lot started when I put some little sketches of my songs up on myspace in 2005. I got positive feedback and started collaborating with people abroad. It all just kind of happened. I mean I worked a lot but I never really had a big plan.
I was just living song to song. Then I did some tracks with a group called Berry Weight for their album and they brought me to Switzerland and France to perform with them. There I met Mattic, and through him La Fine Équipe.
Mister Modo and Ugly Mac Beer contacted me cause they heard my stuff through Blanka. The world is small and the music world even smaller.

What did they bring to you?

Well, they brought a lot of wonderful experiences. A lot of travelling and the joy of connecting and sharing music, thoughts and sounds. And friendships. A few really really deep ones. I mean, I ended up living in Paris and I go back as often as possible – so in a way it also brought me a second home.

We really feel divers influences when we listen to Modern blues: jazz, soul, afro, blues, etc… and many more. Where do you draw all that? I believe that you have travelled a lot. Have all these experiences of life helped you to also enrich your musical spectrum?

There has always been a lot of inspiration in travelling yes – removing yourself from what you know and feel secure in… Sometimes you need to go away to put things in perspective.
But also, Im just a big music lover. I got my musical education at the local library in my hometown when I was a child and I just love to discover new music. All kinds – as long as it touches me in some way.
The list of artists that have inspired me is very long and counts both musicians, painters, poets – known and unknown. Last week I was in the metro in Paris and this guy that obviously had a drug addiction entered the wagon I was in and sang this old french song acapella. Unfortunately I didn’t get the title but it was truly beautiful. So inspiring. His presence was so strong, his phrasing on point and his soul shined right through. That ride really stuck with me.

What will be your next project, that we can expect?

Well, now I want to do something totally different. Maybe in a studio with super sound, with a great team of musicians and maybe a producer. That would be the opposite process of the last project… Wouldn’t that be fun?